The Deborah J. Norden Fund, a program of The Architectural League of New York, was established in 1995 in memory of architect and arts administrator Deborah Norden. The Fund has supported a fascinating array of projects, from a study of the Cambodian modernist Vann Molyvann, to the social impact of new architecture and planning interventions in Medellin, Colombia, to the insertion of built form into fragile ecosystems in Australia, to the stereotomy of complex surfaces in French Baroque architecture.

HOW TO APPLY
Applicants must submit a maximum three-page proposal, which succinctly describes the objectives of the grant request and how it will contribute to the applicant’s intellectual and creative development. The grant amount requested (up to $5,000), a maximum two-page résumé, and a projected schedule and budget for travel and other costs must also be included. An addendum of no more than four pages may be submitted in order to include images, maps, or other supporting material. Applicants must request two letters of recommendation from individuals who are knowledgeable about the applicant’s ability and project. Should you apply as a team, two recommendations per group is sufficient. Applicants must reside in, but need not be citizens of, the U.S., Canada, or Mexico.

The application process is extremely competitive. The intention of the fund is to support genuinely independent projects that require travel. Grant funds cannot be used for tuition, and grants will not be awarded to support participation in an organized program, such as a university’s summer abroad program. While requests for support of dissertation research will be considered, they are not a priority of the fund. Preference will be given to strong proposals from applicants who have not had this sort of opportunity before.

SUBMISSION REQUIREMENTS
Applicants must submit their proposals, résumés, schedules and budgets, and optional addenda digitally as letter-sized PDFs. The applicant’s name and project title must appear on the top of the first page of the PDF. The application PDF should be emailed to norden@archleague.org with the subject line “Norden Application 2016” by 11:59 p.m. EST on April 22, 2016. Faxed, mailed, and late applications will not be accepted.

Letters of recommendation should be mailed to:

Awards will be announced in early June 2016. 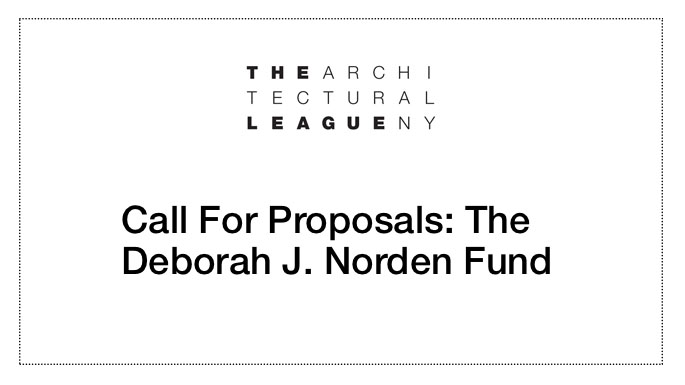