When San Francisco Supervisor Harvey Milk took his bullhorn and rallied crowds at the intersection of Market and Castro Streets, he inspired a generation and helped forge the LGBT civil rights movement. And when Milk was assassinated as one of the nation’s first openly gay politicians, it was in this same place that thousands mourned, and many more still come to this day to remember.

Now steps are underway to finally make this hallowed ground a fitting tribute to both Milk and the gay rights movement. A major re-imagining of Harvey Milk Plaza is underway, with an international design competition to create the space.

This competition’s aim is to redesign this space at the historic heart of San Francisco’s LGBT community to honor the significant contributions of Harvey Milk as well as to recognize his role in the ongoing struggle for LGBT civil rights.

Initial funding in the amount of $500K USD to support the design competition and subsequent plaza development has been provided by an anonymous donor via the Horizon’s Foundation. Additional fundraising efforts are underway to secure the additional $10 million USD required for the full funding of the design, construction, and maintenance of the plaza. Those interested in supporting the plaza with a financial gift may visit friendsofharveymilkplaza.org to donate or receive more information on the competition.

In January 2017, the Friends of Harvey Milk Plaza held two meetings to collect the community’s vision for a new plaza. Attendees shared ideas on how best to honor Harvey Milk’s contributions in a memorial/art installation, create a public space, and design a safe space that is accessible by all.

During the community meetings, feedback was solicited in three areas:

Castro neighborhood residents and users of the plaza in attendance expressed the desire for inspirational art that stirs emotions and encourages people to learn more about the plaza’s namesake, Harvey Milk. The community hopes submissions will shape the space into one that may be used for public gatherings in time of celebration, mourning, or protest, while remaining safe and secure in the early morning hours and evenings.

Design teams should look to the past to inspire and inform the future, presenting art that inspires the next generation of citizen advocates, LGBT leaders and allies to any marginalized minorities. 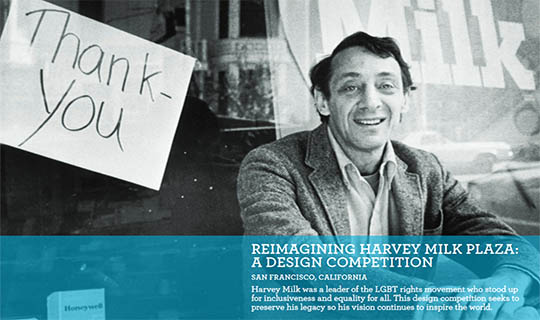