“Off the Rails” Design Competition

Fort Collins, Colorado is a small city located at the base of the Rocky Mountain foothills along the Cache la Poudre River in northern Colorado with a rapidly-growing population numbering just over 161,000 at the start of 2016. Sitting at an elevation of 5,000 feet above sea level, the city enjoys a sunny four-season climate with mild winters.

Currently in the midst of a cultural renaissance period, Fort Collins continues to frequent many “best-of” lists as a great place to live, work, and play, and was named Money Magazine’s ‘Best Place to Live’ in America in 2006.

The largest employer in the city is Colorado State University (CSU), a major land-grant research institution and source of talent for the city’s many high-tech employers such as Hewlett Packard, Intel, and Avago. Known as a craft beer-brewing mecca, Fort Collins boasts 20 award-winning craft breweries, New Belgium and Odell as trailblazers, along with a regional brewery for one of the best-known large beer makers in the world, Anheuser-Busch. Art and culture thrive in this city, which features a vibrant, historic Old Town district for shopping and dining, a half-dozen live theater stages in production throughout the year, and a flourishing local music scene. Recreational, competitive, and commuter cycling are also extremely popular in Fort Collins, rounding out its reputation as a great place for ‘Beer, Bikes, and Bands.’

This three-stage public design competition is soliciting exceptional design concepts which addresses the interface between the Burlington Northern Santa Fe (BNSF) Railroad right-of-way and the public streetscape along the Mason Street Downtown Corridor. The purpose of this design competition is to provide designers, planners, and citizens an opportunity to create compelling design concepts for this unique urban condition that enhance the streetscape and address the aesthetic, social, multi-modal transportation, and related safety issues for the segment of the Mason Street corridor along the BNSF Railroad that runs from Laurel Street to Mulberry Street (approximately a quarter mile). Individuals and teams comprised of local, national, and international members are invited to offer their solutions for the improvement of the streetscape from sidewalk to sidewalk – excluding the railroad easement.

The conditions along the Mason Street Downtown Corridor present a unique urban design challenge that offers the opportunity for public space improvements.

A series of open houses have been held by the Urban Lab from 2013 to 2015 to seek public input regarding concerns over the Mason Street Downtown Corridor. Citizen comments highlight several common themes:

For this design challenge, we particularly encourage that the following criteria be considered:

The competition site is a 0.23-mile segment of the Mason Street Downtown Corridor from Laurel Street to Mulberry Street. Colorado State University, home to 32,236 students, bounds Laurel Street to the south. North to Mulberry Street supports a mix of residences and commercial establishments. The site serves as a connector, transitioning the University to the Downtown.

Along this segment, multiple transportation modes converge. The site is well-served by public transport with the MAX line. At the Laurel Street intersection MAX joins the two-way street. Two stations are located along the site – Laurel station and Mulberry station. The Mason Trail, a popular bike route for students and professionals, merges onto Mason Street at Laurel Street and connects to the city’s larger route system. The BNSF Railroad track centrally divides the street as car traffic travels alongside. Pedestrians frequent the area to access its amenities.

Over the past decade the site has seen growth and change supporting high public use. Various redevelopment and infill projects have been spurred by the Mason Corridor economic development initiative anchored by the MAX BRT system. The site is transforming into a popular and progressive urban space for all ages and uses. 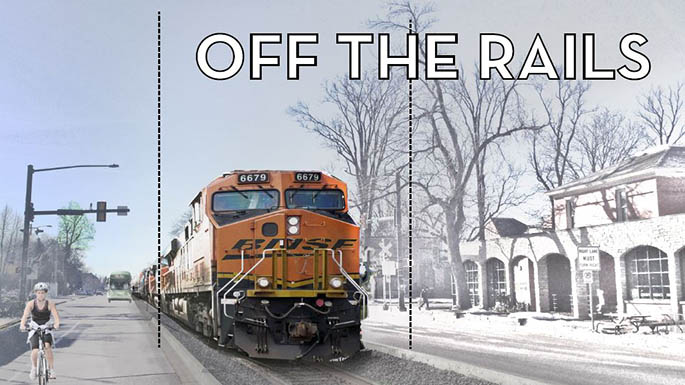