Vilnius city municipality, together with Lithuanian Railways (LTG), have just announced an open international architectural competition for reconstruction of Railway Station, Central Station Square and Public transport terminal in Vilnius, the capital city of Lithuania. Competition of such complexity, with the largest public transport centre in Lithuania to be restructured, has been announced for the first time ever. The competition task involves designing Vilnius railway station complex, central station square and public transport terminal.The competition was announced on 3rd of March 2021, its terms and documents were published in the Central Public Procurement Information System (CVP IS) and the Vilnius Connect project website.

The participants will have to create an iconic and globally recognizable international railway station project, offer a public transport service infrastructure that would represent Lithuania and Vilnius in compliance with the highest quality standards, form an attractive station square, and offer an idea for a viable and connecting Station district urban centre.

Our goal is that any person who arrives by train or bus to the city immediately sees that it is a vibrant city of the future, and when they step into the station square or street, they will feel that the city is cozy, green, and inspiring.

Projects for the reconstruction of stations in the world’s capital cities usually take place only once in a century, so this is a historic opportunity to define a vision for future generations. The partnership between the City and the businesses for regeneration of the station district reflects our determination to open up previously closed industrial spaces for the city and to adapt them for the people. Here we want to create such spaces that correspond to the best examples of Western European railway stations, and the station would not only be a start or the end point of travel, but also a new attraction centre with leisure and service spaces, comfortable connections for pedestrians, cyclists, and everyone choosing comfortable and eco-friendly trips by train.

The jury: the entries will be evaluated by the international Jury, consisting of 11 members. The majority of the Jury members are professional architects, urban planners, and landscape architects from Europe. Other jury members are representing Vilnius City Municipality and Lithuanian Railways (LTG).

Organizers: The international competition is initiated by LTG, which manages the railway network in Lithuania, LTG Infra and Vilnius City Municipality. The competition procedure is being organized by the Lithuanian Association of Architects and the consulting company Civitta. 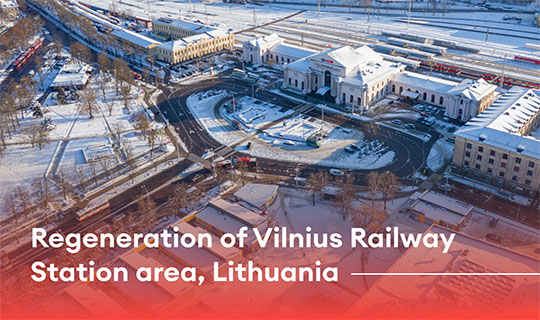