Paris and the entire country of France is world-famous for its cuisine, with a non-exhaustive list of delicacies and culinary systems. The culinary reputation of Paris is very rich, cultured and diverse. French food culture, according to UNESCO, is important for ‘bringing people together to enjoy the art of good eating and drinking’ and the power to create ‘togetherness, the pleasure of taste, and the balance between human beings and the products of nature’.

French food culture includes such wonders as the croissant, éclair, bouillon, crepe, and, of course, the baguette. Wine (there are as many types of wines as there are regions in France), bread (usually eaten in some form with each meal) and cheese (there are over 400 types of cheese in France made from all types of milk, including goat) are the staples of French food culture and French life.

The word and idea of a restaurant, which really came into modern times at the end of the French Revolution when the nouveau riche (newly rich) had more money to spend, come from French. From cafes to bistros, the world owes a lot to the French for the commercialization of specialty foods and making them available to the public. The first Parisian restaurant was founded by Beauvilliers in 1782 in the Rue de Richelieu, called the Grande Taverne de Londres. He introduced the novelty of listing the dishes available on a menu and serving them at small individual tables.” Following the revolution, the abolition of the guild system made it easier to open restaurants. Also, since so many aristocrats fled or were executed, their former cooks and servants found new employment and Paris became the center of the new restaurant scene, which, to some degree, it remains today.

The aim of this architecture competition is to design a new 21st century restaurant and wine bar on the promenade along the River Seine in Paris. The restaurant should be unique and innovative in all respects and should invent new ways to provide an overall sensory experience to the customers. The restaurant should experiment with unique materials, volumetric compositions layout systems and other transitional spaces to make it a new prototype and exemplary typology that will become an active gastronomical hub in the heart of the French capital. The participants should:

Create an architectural icon along the River Seine, that will become a popular destination for the residents and everyone who visits the city.  The participants must consider the attributes of light, color, materiality, aesthetic quality that will add a sense of identity to the restaurant, eventually creating a landmark along the picturesque context of River Seine. The participants are free to create their own design language, ranging from contemporary to traditional but should be able to merge the shell with the existing context in a respectful and additive fashion.

Maximize the use of the waterfront context and the promenade into the architectural concept for the restaurant. The participants are required to use the unique nature of the site into their design proposal and architectural built form. The participants can use the water element and picturesque surroundings and develop the restaurant as an open, semi-open seating zone. The quai or the dock-promenade can be used as an extension of the restaurant and cultured into a social and leisure zone.

This is an open international competition hosted by archasm to generate progressive design ideas. There are no plans for the riverside restaurant to be built. The competition is organized for education purpose only. 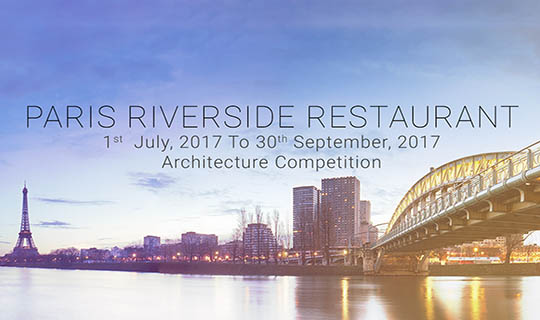