Sun Robotics is a call for projects of ideas at the urban and architectural scale, followed by implementations. The competition will result of up to three submitted entries by continental site, selected by a jury of leading figures in architecture, urban planning, hospitality, engineering, environmentalism, design and publishing. The competition organizers then help the prize-winning teams to secure commissions to be implemented.

After the announcement of the results, meetings are organized on each site with the city representatives, the juries and the winning teams. The competition will result in the selection of three call for projects of ideas at the urban and architectural scale worldwide. Each will win top title, $4000 US, followed by implementation.

Could today’s architecture be a power generator? Could we help transform a topic we all suffer and made it to be our main concern? Climate change is now, and it‘s a valuable reality: Energy costs, cost of climate change and the ongoing pressure stresses on the energy market and its policies behind.

More than 40% of worldwide energy consumption lies on buildings. Nothing new but in fact that represents all existing coal power plants on earth and the highest output rate of carbon emissions. What if the solution lies in the way we conceive buildings. Sun Robotics ltd invites emerging architects, graduate architects, urban planners, landscape designers and engineers to submit proposals to the fields of hospitality, urban planning and social spaces in the most crossroads city centers of the world: London, Barcelona, Paris, Berlin, New York City and Tokyo.

Sun Robotics, a divisionf of rawlemon™, has successfully reinvented Building-Integrated-Photovoltaics (BIPV) by integrating the key solar power plant components onto patent pending module technologies called MicroTrack. The system provides a building skin with a design made from transparent solar power robots to integrated in facades and glazings, as a built-in device. Based on zero-emission solar conversion and providing 4 times more efficiency than the current available products for building integration (electricity and thermal production, transparency, shading, ventilation and beauty) rawlemon™ transforms the future of zero-energy buildings.
The competition seeks the shell for this transparent powerful technology, exploring architecture, urbanism, and the ways in which people interact with cities and use public space. Each site allows the participants to critically and creatively explore two sets of issues: (1) the way that architecture can respond to the energy problematics in cities through design and sustainable solutions to reach the stand-alone energy buildings of tomorrow; and (2) the way to finance affordable social spaces on vacant public places in city centers to avoid dead zones, rather to promote urban spontaneity.

PROJECT GOALS
• Promote urban areas through city center vacant spaces (explore the six cities government property sites)
• Foster innovation and bring sustainable solutions exploring the possibilities of the MicroTrack system and the technology behind. Demonstrate through high rise building projects, the potentialities and efficiency of the system but also its ease of use.
• Define the program tailored to meet with the urban context to allow affordable economy model funding social spaces.
• Combine the sun robot module and the program to design the entire building as the first net-zero energy high rise in the world. 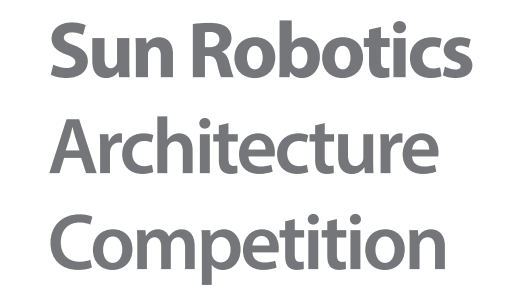