In collaboration with Sunbrella®, America’s most leading performance fabrics brand, YoungBird, a Shanghai-based design media platform, has launched this competition that is open to students, professionals and design enthusiasts the world over in a bid to create a“shade-scape”for people staying outside and invite discussions on the subject of “urban environmental quality” .

The jury features heavyweight industry veterans like Grace Chen, haute couture designer, Jamy Yang, industrial designer and founder of YANG DESIGN and YANG HOUSE, Greg Voorhis, design director of Glen Raven Custom Fabrics, as well as Isa Ye, founder and CEO of YoungBird. Contestants are required to conceive a pattern on the sunshade surface 2.5 meters in diameter using Sunbrella® fabrics. The Top 10 works will be updated and fabricated by the brand’s US-based team, and then put on display at landmarks or major roads in several first-tier Chinese cities.

BRIEF
In an age plagued by global warming, urban heat island effect, traffic congestion and air pollution, people living in urban areas tend to stay inside their air conditioning-equipped houses all day long in summer. Yet a beautiful summer should not be necessarily accompanied by high levels of energy consumption, environmental damage and personal health problems arising from staying indoors for long stretches. Only by staying close to nature could we improve the quality of our lives.The “Shade-scape” Sunshade Pattern Design Competition 2017 is an attempt made by YoungBird to create a “shade-scape” for people staying outside. “Shade-scape” is a cityscape shaped from sunshades that encourages citizens to walk out of their houses, enjoy summer to the uttermost under the sunshades and thus make a return to nature.Contestants are required to conceive a pattern on the sunshade surface 2.5 meters in diameter using Sunbrella® fabrics. The winning works will be put on display at landmarks or major roads in several first-tier Chinese cities after being optimized and fabricated by the brand’s US-based professional team.
ELIGIBILITY

Any professional, student, design enthusiast of all ages with design- and art-related background across the world is eligible;·  Only individual registration is accepted, with no more than 2 entries from each contestant.

Each of the Top 10 finalists will sign an agreement with YoungBird, under which their work will be updated and fabricated by the co-organizer Sunbrella®’s US team;

The Top 10 works will be put on display at landmarks or major roads in several first-tier Chinese   cities and further promoted via Young Bird Gallery; A custom-made certificate; In-depth   coverage by YoungBirds custom publication and YoungBird new media platforms. 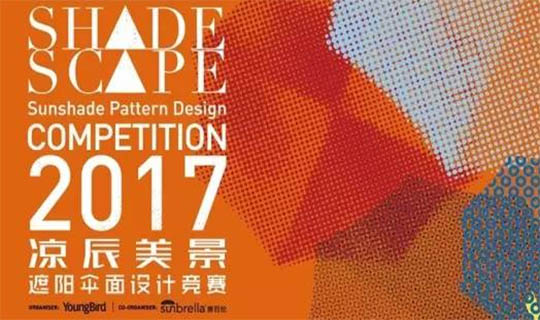