The Competition shall be conducted in the Polish language.

-If the documents specified above are in another language, they shall be submitted together with a translation into the Polish language that is certified by the Participant as being in agreement with the original.

Pursuant to the Common Procurement Vocabulary (CPV), the subject of the Competition has been qualified as being:

Participants in the Competition may be from Poland or abroad (foreign in the sense of having registered offices / place of residence outside the Republic of Poland) who:

•Are not subject to exclusion pursuant to Article 24, Clause 1 of the Act, and

•Meet the following conditions for participation in the procedure, specifically they have at their disposal for work on the Competition a minimum of one person holding a diploma demonstrating completion of a school of higher learning (Master’s Degree) in the area required to practice the profession of architect.

The Competition involves the development of a functional–spatial concept for Plac Centralny [Central Square] in Warsaw.

The goal of the Competition is to select the best urban–architectural–landscape concept for the Central Square in terms of program, space, function, and architecture. Central Square is the public space that will be created between the main entrance of the Palace of Culture and Science Building and Marszałkowska Street. The Competition Design shall take into account the national, regional, and local dimension of the future square as it function as an attractive venue for various forms of activity ranging from a simple walk crossing the square, through the private spending of time by individuals, all the way to mass events.

An important aspect of the Competition task is the finding of the proper balance guaranteeing convenient conditions for future use while taking into account the historical heritage of the place. In the opinion of many inhabitants, Central Square as planned for the beginning of the 21st century as a huge open space should not be deprived of vegetation.

The goal of the Competition is the identification by the Competition Jury, through verification and an evaluation of agreement with the principles in the Rules and Regulations, of several Competition Designs that will beawarded equivalent prizes. An equivalent prize consists of a prize money as well as an invitation to negotiations—a negotiation procedure without announcement for the awarded team. The negotiations will be preceded by a public discussion on the awarded Designs. The Design earmarked for execution will be identified from among the awarded Designs, taking into account the results of the discussion. The chosen Competition Design selection procedure is in response to the proposal to conduct public consultations.

The Competition Organizer assumes the awarding of five (5) equivalent prizes of a gross value of PLN 50,000 each as well as an invitation to participate in negotiations without announcement for each of the awarded Designs (the procedure for the granting of a public commission that shall involve the detailed development of the Competition Design that shall serve as the basis of the execution of the square). 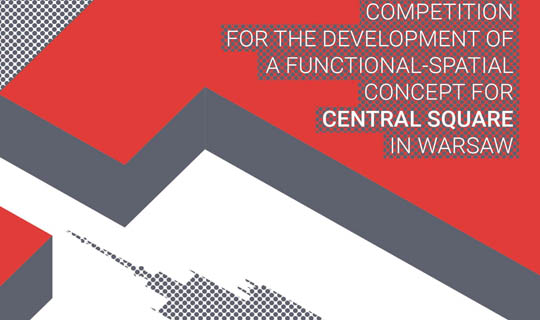